Why are Some Countries Removing Wi-Fi in Schools and Others Not?

Why are Some Countries Removing Wi-Fi in Schools and Others Not?

France[1] and Russia[2] have current laws to minimise Wi-Fi exposure to children in schools. These two countries have the world’s longest research history on health effect of microwaves, both over 100 years.

1. Too many devices for long periods of time = chronic exposure

Much of the research has focused on the effects of mobile phones, but there is already some research on chronic exposure to 2450 MHz frequency microwaves, including Wi-Fi devices. The problem in Wi-Fi routers lies in children’s chronic (24/7) exposure to pulsed microwave radiation. Isn’t that reason enough to minimise children’s risks in classrooms?

2. It can have damaging effects on our bodies

Wi-Fi and cell phone data is transmitted by pulsed microwave radiation. This creates a continuous electromagnetic field (EMF) exposure in which we are engulfed. When you browse the world’s largest EMF research database [3], it reveals the effect of Wi-Fi in two areas:

Fertility damage is seen in animal and cell studies showing reduced motility of sperm and testes malfunction. Oxidative stress is seen both in animal and cell (in vitro) studies, indicating a risk of inflammation also to Wi-Fi users [6]. Chronic inflammation leads to diseases to which children and pregnant women are especially susceptible because child and fetal cells are still growing, their bones are softer, and they absorb more radiation. Women’s immune systems are suppressed during pregnancy so they are more vulnerable to radiation too.

The Council of Europe warns about installing routers in schools and recommends a 100 µW/m² precautionary level in classrooms [7]. When a Wi-Fi router is installed in a classroom these levels can reach 30.000 µW/m² (peak value). In many schools, Wi-Fi routers are attached to the ceiling of the classroom. This may be particularly risky, because the router uses microwave radiation to transmit its device ID continuously, even when there is not a single wireless device connected to it. Often the router is rather close to children’s and teachers’ heads [8] and these signals enter one’s body as they travel through walls, ceilings and floors.

4. Wi-Fi routers don’t have to be on all the time

Today the default is to have Wi-Fi on all the time, which adds up to a very heavy cumulative dose of radiation. The mobile industry has a patent [9] to change Wi-Fi routers and the continuous 10 times per second (10 Hz) beacon signal for health reasons. 10 Hz pulse itself is problematic, since in human brainwaves this 10 Hz ‘hits’ the alpha band and can interfere with cognitive abilities and sleep.

The patent is to automatically shut down this continuous device ID sending [SSID]–functionality in the Wi-Fi router when not in use. This would bring a radical decrease in pulsed microwave radiation exposure especially when there is no traffic (no devices connected to the Wi-Fi router). This will create an environment where the Wi-Fi only turns on when it is needed, almost like “Eco-mode” on the cordless DECT phones available in some countries. The patent application mentions DNA damage, which has been found in multiple-studies [10]. Until this new technology is brought to market however, we would be wise to turn off the Wi-Fi when not absolutely needed.

So why do we still have Wi-Fi and BYOD (Bring Your Own Device) policies in schools? Often Wi-Fi risk is down-played by saying “the exposure is only a fragment of the public exposure guidelines.” Current radiation guidelines are 20 years old and do not take into consideration biological effects or the pulsed-nature of the signal, where there is a great difference between average and peak values [11]. When Wi-Fi devices produce pulsed microwave radiation, its peak values will exceed several precautionary recommendation levels of what is considered safe for exposure.

Additionally, current guidelines only account for radiation from one device. With dozens of devices emitting radiation at once in a typical classroom, children and staff are exposed to very high amounts of microwave radiation not accounted for in outdated guidelines. It is no wonder the EUROPAEM environmental health group listed Wi-Fi as one of the riskiest RF-technologies [12]. They point to the exceptionally fast rise time and fall time of Wi-Fi signals, which may have an effect on calcium channels in human cells and the unnatural opening of these channels [13] which can lead to disease. 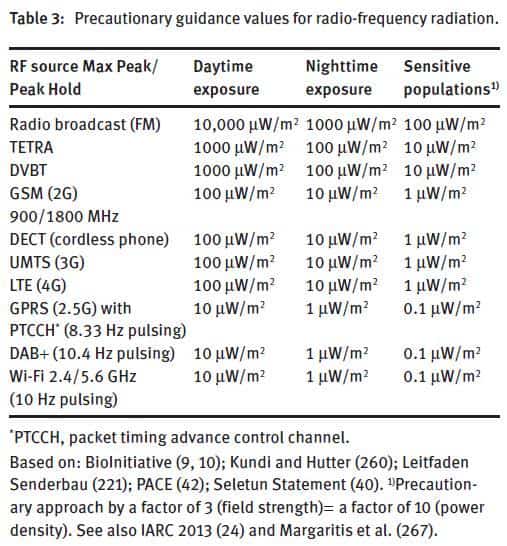 5. What can be done to reduce the risk?

Generally, schools should be hard-wired, so that in every classroom the Internet is accessible through Ethernet-cable connections. It is feasible to have wired schools, with no Wi-Fi at all.  Even tablets can be attached to the Internet by Ethernet cables and adapters. For laptops and tablets, the Wi-Fi and other antennas (Bluetooth, data, locator) should be turned off (at least most of the time). As a half-measure, Wi-Fi could be used by the adults in the building during the hours in which children are not present. Data uploads and system updates could be done before and after school, or overnight. If Wi-Fi routers are installed, they should be placed away from classrooms and there should be a switch to turn each Wi-Fi router off immediately after use.

Maryland, USA, recently set a positive example and a precedent for healthier schools. Maryland Children’s Environmental Health and Protection Advisory Council has provided excellent recommendations for safer use of Wi-Fi and other technologies in schools [14]. These recommendations echo our suggestions to use hard-wired connections with the wi-fi turned off.

We urgently need accessible and healthier classrooms. We at Wireless Education are pleased to develop these together with learning-focused schools and parents, and look forward to doing so with the support of responsible companies.